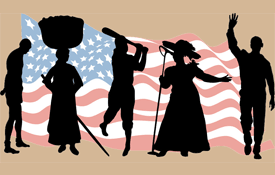 John Messeder, writing in the GettysburgTimes.com, reports that "an organization attempting to unite 175 miles of history, from Gettysburg to Monticello, recently received a grant to help research and interpret the African American role in the USA's formation."

"The Journey Through Hallowed Ground Partnership has been awarded a $10,000 grant from the Virginia Foundation for the Humanities to research, identify and interpret African American sites along the pathway.

Partnership President Cate Magennis Wyatt feels that "Understanding African American history helps us understand the fabric of our American culture and expands our understanding of ourselves as a people."

The 175-mile Old Carolina Highway, now designated U.S. 15, once carried Thomas Jefferson toward Philadelphia during his work on the Declaration of Independence. Eight presidents have made their homes in the region.

Although possibly best known for its Civil War battles, the region played critical roles in the Revolutionary War and the War of 1812. It also has a high concentration of Underground Railroad stations.

In announcing the $10,000 Virginia Foundation for the Humanities grant, Wyatt noted much African American history is only beginning to be documented at local levels."