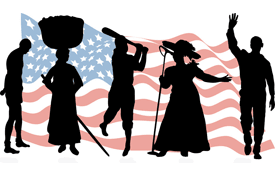 1. Which political party was founded in 1854 for the purpose of ending slavery?

2. Who said "The Republican Party would have the American flag and swastika flying side by side?"

5. Which party did the "Great Emancipator" Abraham Lincoln belong to?

6. Who is the only current member of congress who was once a "Grand Kleagle" in the Ku Klux Klan?

8. What percent of Democrats voted for the Thirteenth Amendment that made slavery unconstitutional?

9. Who deployed the 82nd Airborne to desegregate Little Rock Schools over the resistance of democratic Gov. Orval Faubas?

10. Who first used the "Willie Horton" issue against Michael Dukakis?

12. Who ended this filibuster allowing passage of the CRA?

13. Which party cast the highest percentage of votes for the 1964 CRA?

14. What percent of Democrats voted for the Fourteenth Amendment guaranteeing equal protection?

15. Which president said "it is all so terribly true" after a private screening of D.W. Griffith's racist film, "Birth of a Nation?"

19. Who appointed the first and second black Secretaries of State?

20. Who said that it gave him "psychological gratification" to spit into the soups and salads of white customers while he worked as a waiter?

21. A 2005 blog contained a racist parody of a black U.S. Senate candidate in minstrel makeup and exaggerated lips with the caption: "I's Simple Sambo and I's running for the Big House." An official party Web site linked to this blog. Name the candidate and Web site.

14. Not one congressional Democrat voted for it vs. 94 percent of Republicans

Ok, Joe has put together a whale of a quiz. It's the real deal. He's done his homework.

You say you're ready for more!...then check out some more questions. You can choose from a variety of different genres, and rate the questions, in our own online collection of black history quizzes we've created.