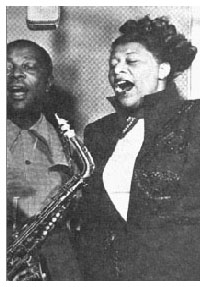 Ella Fitzgerald, (1917 - 1996), a jazz great, was one of the first African American singers to appeal to both black and white audiences.

Poverty could not suppress the raw talent that was to lead to her eventual success.

She was born in Newport News, Virginia. Her family chose to make New York City their adopted home.

As a teenager in the 1930's, Fitzgerald began six decades of performance encompassing 250 recordings and 13 Grammy Awards.

She sang the songs of the best songwriters, and performed with most of the greats, including Louis Armstrong and Dizzy Gillespie. Diabetes eventually claimed her life at the age of 79. 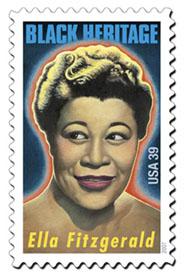 The stamp image is a portrait based on a photograph taken around 1956. As you can see, this likeness captures the joy and excitement that Fitzgerald brought to music.

Fitzgerald won the National Medal of Arts, presented to her in 1987 by President Ronald Reagan. She was one of five artists awarded Kennedy Center Honors in 1979.

In 1989, the Society of Singers created an award for lifetime achievement, called it the "Ella," and made her its first recipient.

In 2005, Jazz at Lincoln Center inducted Fitzgerald into its Nesuhi Ertegun Jazz Hall of Fame.