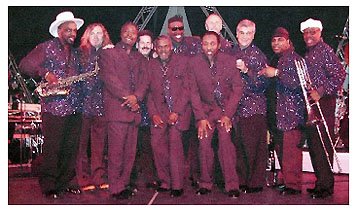 The Trammps have traveled with as many as 11 members, musicians who've also played for both Kenny Gamble and Leon Huff's Philadelphia International Records, and later for Vince Montana's Salsoul Orchestra.

By mid 1975, the Trammps became one of Atlantic Records hottest dance music acts.

Their first album with Atlantic produced "Hooked for Life," and "Where the Happy People Go." (their biggest pop hit).

For 1977's "Disco Inferno" anthem, the Trammps were recognized as the best performing group by one of New York's most popular clubs, 2001 Space Odyssey, the location for the movie, Saturday Night Fever.

The soundtrack from the movie included "Disco Inferno," for which the Trammps won a Grammy Award in 1979.

Original members, Jimmy Ellis, Harold Doc Wade, Stanley Wade and Dave Dixon continue as the core of the Trammps. They tour nationally and internationally with musicians from the original touring group.

Catch The Trammps, Friday, August 1, 2008, 7:30 pm at the Bank of America Pavilion, Boston, Massachusetts, for the Solid Gold Dance Party.