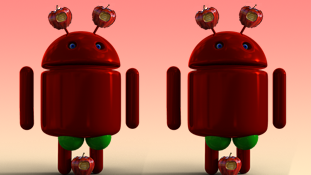 During a recent virtual summit I attended, all of the presenters were asked for their favorite: iOS or Android? I did not present.

Like lemmings jumping into the ocean waters off a cliff, one by one each presenter answered iOS.

Our first computer experience was with an early Mac. We then moved on to Windows PC's.

Today, we have four iPhones: 4, 6, 7, and X, plus an iPad along with a Motorola phone and a Samsung phone representing for Android.

Let's not forget a MacBook Pro, iMac, and multiple Windows desktop and laptops machines around various workspaces at Quikthinking headquarters.

We are not tech crazy, but the mobile devices are used to test our apps before submitting them to the app stores. We don't want to disappoint you!

Frankly, I'm always surprised in a world where approximately 85 percent of mobile phone users have Android, in the USA few seem to admit that they actually prefer Android.

Score one for the iOS cool kids.

Here's my advice to you if I was starting over today to develop software apps.

I started with Android ten years ago. See our Timeline. Learning to program with the Android tools available in 2011 was financially more accessible for those with limited budgets.

iOS required not only a bigger bankroll, but a longer learning curve to tackle their Objective-C programming language for apps.

Today Swift leaves Objective-C behind as the programming language of choice for Apple apps. Swift offers an enhanced ease of use and improved features.

Submitting apps to Google and Amazon was much more straight forward in 2011. At that time acceptance in the App store (iOS) had lots of challenges although they have improved their review systems.

Creating reliable software isn't easy, but with a good attitude to learn along with a system to improve and grow anything is possible.

Personally, I'm always slowed down by the endless requests made by the iOS devices badgering you to supply permission to do little things on the devices.

Yes, it's a security thing, but I like the rugged individualism of Android gear that leaves much more freedom of choice in your own hands.

If you start with Android and then migrate to iOS, you won't be disappointed. You should definitely learn both.

Today we have solid in-house knowledge of both operating systems.

So, when it come to a question of Android or iOS, I proudly say Android. My very first Android phone cost only $25 dollars and it worked great!

We hope you enjoyed the image of robots with apples on their antennas! It's one big beautiful world!

Android vs iOS Joy And Pain
Android or IOS Apps. Touch the titles below to learn more.