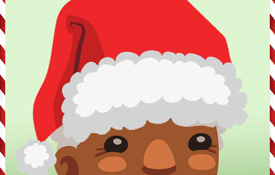 We love the serious 'Black History apps' we create for the community. We also love the entertainment side of mobile devices.

That's why developing a few games targeted toward the young at heart is very important to us.

Santa Jump Game Party mobile app is for everyone. It's not a Multiplayer Online Battle Arena slaughterhouse. There are plenty of violent MOBA's you can play.

But back to Santa...

A year ago in 2019 we released Santa Jump Game for Android with zero publicity from us. It's a super easy casual game you can start playing and master immediately. Touch, jump, and score. That's it.

As we release the iOS version today, we took some of the iOS upgrades and shared them with the Android version.

Both versions are identical. We'll start to get the word out about this game now.

Get your hop on with Santa. Learn more about Santa Jump Game Party by following the link. Watch the video from 2019 below.