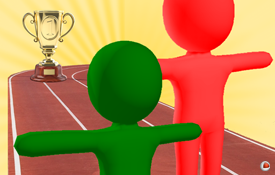 Would you create an electronic product for consumers knowing that you could not trust the reliability of your creation?

We wouldn't, and we don't, however bug ridden technology has been shoveled into the hands of eager consumers forever.

The game Cyperpunk 2077 is just one example of a video game title that should have never been released because of multiple problems inside of the app known to the creators.

I never won the project coding races while creating source code as a college student. Accuracy without bugs was always more important to me than speed.

Today, when I scan through public reviews about our apps, even when people don't like a title, some will say "at least it runs great on my phone."

So what do we do in-house to implement excellent quality control? Here's an example using our new app:

Spelling Runners game for iPhone, iPad, and Android has just been released .

The game uses cyber athletes who compete in an arena arcade completing words by running over letters with their feet.

We test games on real devices before submitting them to the app stores using these solid tools plus several more not listed:

So Spelling Runners for Android has to work perfectly on those four Android devices before we release the game.

You'd be surprised about the subtle differences across Android hardware as each manufacture changes Android in a variety of ways.

Even with an iPhone and iPad, elements have to be just right so that an app performs correctly on either device.

Nothing is ever perfect, so there is always room for future tweaks to make an app even better.

Once everything works, you are the final judge about gameplay and aesthetics!

That said, for a cool mobile arcade game that is fun for the young and old, check out Spelling Runners from Quikthinking and enjoy!