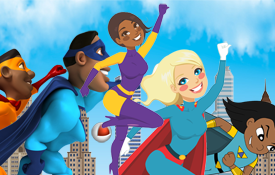 So easy to play it's boring, or so hard to learn it's easy to lose? That's any mobile game challenge. As you know, good games take a few moments to flush out and more devoted time to master winning techniques.

Superhero Flyer is a side scrolling action game that looks simple to play but there is significant strategy you must use to get to the top levels.

This is our most difficult game. Watch the 59 second video for a quick overview.

Here are some ways you can get the most fun out of Superhero Flyer for iPhone and Android.

You start the action with Scout and play against the countdown clock. Touch the screen to keep flying. Scout has 5 lives and leads the way. You can't score with Scout. Scout powers up to Blue. When Scout touches the sun, moon, windsock or drones Blue will appear to continue the game.

Blue is active for a random amount of time. A short amount of time. Blue will take out the small rockets (enemies) and score points, but will be eliminated by large rockets. In level 1 when Blue touches a balloon, Trax appears (and Blue disappears). Trax (below) can take out all of the rocket enemies but your score won't climb as fast.

That's why in the video I avoided making a move to bring Trax into the gameplay. Trax can be used in the game for a random amount of time that is short. Scout reappears when Trax disappears! (level 1 and possibly level 2).

In a few of the levels, meet the eagles. They want to and will attack the drones. Don't worry, you or the bomb enemies can't hurt the eagles. Get Scout to touch the drones before the eagles swoop on them if you can, or you lose valuable time bringing Blue back into the game.

If you can get to level 5 then you'll control Bambi (left) and Thump (below) as they take the lead. Bambi and Thump can knock out balloons, drones, and rockets. Super tip. In levels 6 - 8 go for the balloons if you can. They have the highest value to score points.

Once you reach level 6, strap in. Score by taking out the drones, balloons, and rockets. Good luck getting all the way to level 8!

I've revealed just enough to give you an edge. Can you get to 70,000 or more points? Grab Superhero Flyer and play the game to score.

Superhero Flyer Challenge - Why Is This Game So Hard?
Android or IOS Apps. Touch the titles below to learn more.