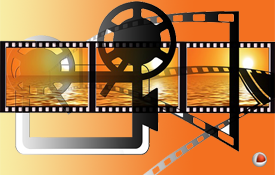 YouTube tells us that Quikthinking Software has posted 120 videos since early 2014. That's a lot of material from movie cameras and cell phones.

Many moons ago before online movies, we learned how to edit 16 mm (millimeter) film in college.

16 mm is an old-school movie medium made from an acetate plastic which displays an image by using a movie projector.

We stuffed this skill into our bag of tricks, not to reference it again until the dawn of digital video production.

Scanning through our YouTube videos, we see a diversity of popularity among the top 5 viewed.

Two are for games, two are for education, and one is for productivity - entertainment.

How did we gauge our top 5 videos of all-time? Each candidate had to have a minimum of 1,000 views.

Fast food seems to stay in style. So does Pizza Burger Match-3 app that was originally released in 2015 (Google Play) as a semi-joke "tongue and cheek" production.

Black History People was originally a "mobile website" that we sunset and turned into an app in 2011. It is now in it's 3rd generation as a concept and 2nd generation as an app. Here is #3 (video released in 2016):

You are encouraged to read the Black History Audiobook Back-Story and watch a different video within the story page.

Pizza is as popular as ever. After watching this one, check out the revealing video How Much Pizza Does $1 get you Around the World in our blog.

For this 2nd version of our Pizza Burger Match-3 app, we commissioned an artist to hand-paint all of the food images using water colors.

Because this is a how-to video we are not surprise that it is #1. "How to Use African American Emojis For Android Text Messaging Update" explains how to enjoy our stickers using any Android phone.

The iOS version has always been much easier to use.

With coaching from this how-to video, we hope we helped many of you who needed a simplified approach to use these emojis across thousands of different Android devices.

Video Victories Getting Good Vibrations
Android or IOS Apps. Touch the titles below to learn more.