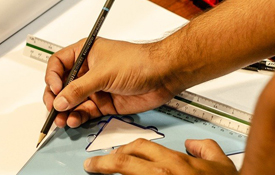 What kind of mobile phone do you have? From a game developers point of view, if your phone is iOS, we celebrate. Why?

iPhone and iPad models add up to a few dozen variants so designing a visual layout to accommodate these devices is straight forward.

Unfortunately (for app developers) there are thousands of Android device models with design features that challenge our screen layouts!

As an example some of our mobile apps have nearly 14,000 Android devices in their list of supported units!

Every manufacturer takes liberties with the Android operating system to make changes.

Samsung in the past has made more changes than others.

Except for the Fire tablet, all examples you see are rendered through emulators while we actually play the game live in real time.

We use in the examples the same game level 9 (there are 20 levels) featuring an 8 column by 5 row design for level 9. See how there are subtle differences across the devices? 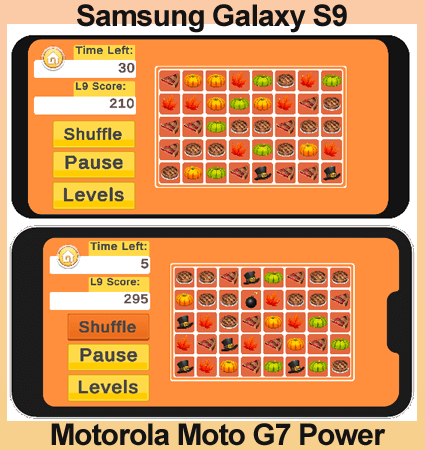 One comment about Samsung. The Samsung Galaxy Z Fold2 5G phone (their most expensive) challenges this game layout.

Yes it works on their foldable phone (screen shot with the game on it not shown) but the phone is so wide rather than tall that we'd have to make a minor adjustment to just the home screen (and not the game) to optimize the look.

Now, see the differences between the LG and Google phones... 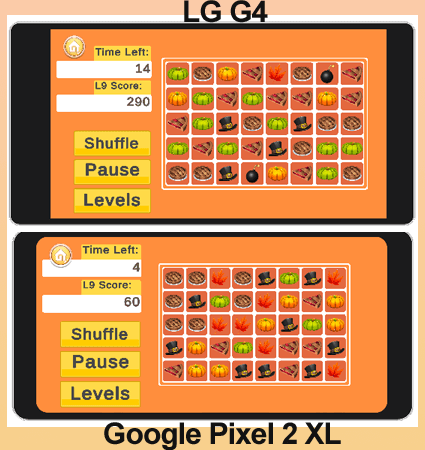 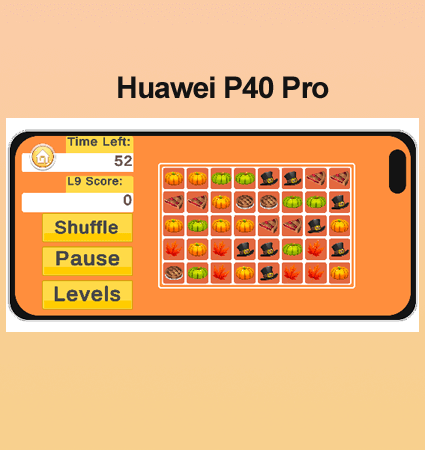 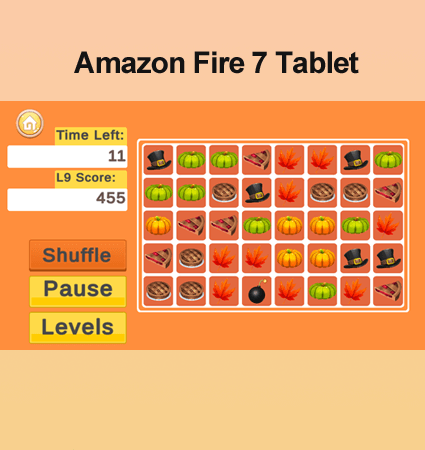 Note again it's the same exact screen design but rendered differently across all of these devices!

It has gotten easier over the past couple of years to build app projects that will look good despite what phone or tablet you have.

We asked you about your phone or tablet. Here are a few of ours that we own and use the most:

We have to use a lot of devices to test-test-test the apps we develop. The highlighted ones above we use everyday.

The Droid Turbo 2 is always in my pocket! Wifi is wonderful for all of these phones - tablets.

iPhone X and Droid Turbo 2 do have active cellular service.

There are a few more not listed that we use only for testing and for nothing else.

These Fire tablets are the only devices we purchased brand new. All other devices were bagged pre-owned used!

As for the game used in the examples, you'll want Thanksgiving Match 3 Game version 2.0 submitted to both Google Play and the Amazon App Store as of this writing.

Hopefully they will go live within days.

Have a wonderful fall season!