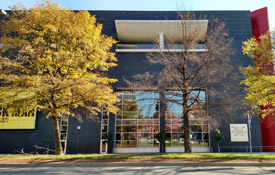 Maryland's Reginald F. Lewis Museum of African American History & Culture opened in 2005 near Baltimore's Inner Harbor. Reginald F. Lewis (1942 - 1993) who was born in Baltimore was a man of many 'firsts,' including establishing the first African American law firm on Wall Street in New York City. The Lewis Museum honors the legacy of a man who was to become an outstanding lawyer, entrepreneur, venture capitalist, and philanthropist.